During the First World War, parts of Fulham were handed over to locals to help support the war effort after which the allotments at Fulham Palace were born and it is this period of history and this re-appropriation of the site that most informs my work. I use organic material sourced and inspired by the area, which is then cast or encased in a cement substitute as a way of preserving the coming and going of life spans as well as creating a juxtaposition of strength and delicacy. This cement substitute also serves as a link to the site, where anchor points used for mooring barrage balloons during the First and Second World Wars are still in situ.

For my final collection at university I focussed on absence and the suppression of memories through the use of white rose heads, which are a symbol of remembrance. Fulham Palace was used as an auxiliary hospital for soldiers suffering the effects of shell shock and so the absence of smell – commonly associated with flowers and also as one of the senses recalling past experiences and their familiar form, has allowed me to contain not just their fragility, but also to hint at the fragility of the minds of those who fought at the Front and convalesced there. 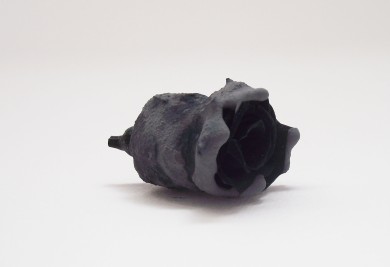