Notes on the Index: Seventies Art in America by Rosalind Krauss

In Rosalind Krauss’s paper, she is investigating the true diversity of the art world during 1970s America. There is an assumption that there was an influx of individual approaches towards art during the 70s rather than a focus on a particular movement or style of the time. The American art world saw this influx through the mediums of video, performance, body-art, conceptual art, earthworks, abstract painting and photo-realism in painting. However, Krauss poses the question of whether the absence of a collective style is the token of a real difference or is there something else for which all these terms could be possible expressions of?

In Vito Acconci’s video, ‘Airtime’ (1973), the artist is seen sitting in front of a mirror talking to his reflected image. Whilst referring to himself, he uses ‘I’, although on occasion he is heard addressing himself as ‘you’, as though he is addressing someone who he imagines is there but is in fact absent. The direction for this ‘you’ keeps morphing and returning back to the ‘I’ who is Acconci, playing out the drama of the shifter in its reversed form.

Krauss also highlights Duchamp’s concept of self and his use of the index but in a different format. His painting, ‘Tu m’ ’ (1918) was in some ways an overview of the index. A series of cast shadows from his readymades put in their appearance – a bicycle wheel, hat-rack and corkscrew are projected onto the canvas, signifying themselves by means of indexical traces, although they themselves are not depicted. And just in case we missed the point, Duchamp has placed a painted hand at the centre, its pointing finger relaying the process of establishing the connection between the linguistic shifter ‘this…’ and its referent. 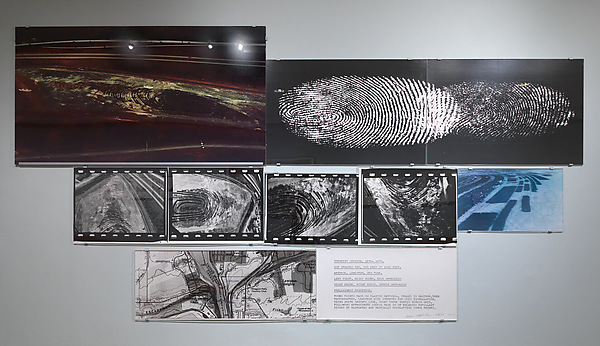 Photography as a form of representation was extremely popular during the 70s, not only as a form of documentation but also as a way of capturing the original object which then combined the two with the absolute terms of the index. An example of this is Dennis Oppenheim’s piece, ‘Identity Stretch’ (1975). Transferring the image (index) of his own thumbprint onto a larger scale in a field outside Buffalo by magnifying it thousands of times and then fixing its traces in the ground using asphalt. The meaning of the work is focused on the pure installation of presence by means of the index and is presented to the public through an arrangement of photographs by way of documentation.

Notes on The Index, Continued: Italian Feminism and the Art of Mirella Bentigolio and Ketty La Rocca by Leslie Cozzi

This paper by Dr Leslie Cozzi, examines the visual language of Italian feminism during the 1970s, brought about by a transformation in the Italian art world as more and more female artists joined its ranks. Previous studies of Italian feminism tended to focus on more political and philosophical developments, whereas Cozzi focuses on language as a way of understanding gendered self-presentation whilst corrupting the predominated male dialogue that existed at the time. The two main artists featured in this work are Mirella Bentigolio and Ketty La Rocca, both of whom used and shared a common fascination with the linguistic shifter and the indexical sign.

Mirella Bentigolio started her career as a poet. Her first collection ‘Giardino’ was printed in 1943 whilst her second collection was not published until 1968, this break was due to her dissatisfaction with the rigidity of the printed world. Bentigolio began to focus on expressive visualization of language and having joined the concrete poetry movement, her use of alphabetic elements to create images, particularly the letters ‘E’ and ‘O’ became signs for community as well as for identity and individuality respectively. “Language is not only bureaucracy and power,” she explains, “it belongs to history, where woman had a large part. It is the woman who gives language to the human being in his first years of existence.” Her work is penetrated by a wry critique of western societies and their male dominated structures, obsession with material consumption and the pollution of the environment and celebration of power over compassion. 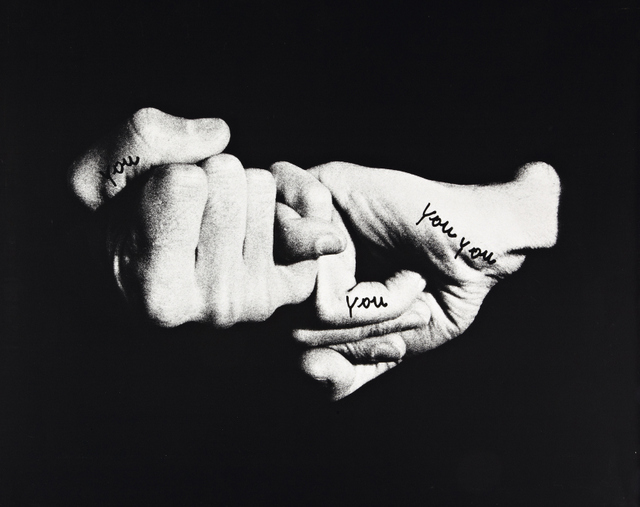 Ketty La Rocca was an artist and leading interpreter of body art and visual poetry. During the early 1970s, La Rocca examined the universe of communication using the mediums of video, installation and performance amongst others. After which she mounted an extensive study of the human hand and examined their potential for expression, whilst making specific references to the female life experience in these works, which were only accredited to certain activities of the female hand, not only as a common metaphor of female industriousness, but also as a way of evoking the idea of manipulation and a way of talking without a single word having to be uttered.

Whilst photography was extremely popular as a use for representing the Index through art, there were those who used the body as a platform instead. Alongside the aforementioned artists and works by body artists such as Orlan, Ana Mendieta and Valie Export there also must be included the radical upheaval in the culture of jewellery and its use of symbolic Index. Gijs Bakker who was one such pioneer with his work, ‘Shadow Jewellery’, (1973) saw it become an effective tool for an ironic commentary on the world of jewellery and of society. The body itself was featured as the working material of Gerd Rothmann’s work, by casting various body and Peter Skubic’s work ‘Jewellery Under the Skin’ (1975) pointed towards the indexical symbol of hidden jewellery, harking towards the body artists of the time.

This alternative use of the Index by way of the body and not just the use of photography has paved the way for the likes of Naomi Filmer whose work ‘Ice Jewellery’, (1999) left its traces physically (Sustainable Jewellery by Julia Manheim) along with Tiffany Parbs’s works, ‘blister-ring’ (2005) and ‘Inflame’ (2009). Whilst photography was of extreme importance during the 70s as a way of relating the meaning of the Index, I think that its use in the realm of jewellery actually contributes to its loss of the Index by losing language through image.